How collaborative robots will usher in the era of Industry 5.0

How collaborative robots will usher in the era of Industry 5.0 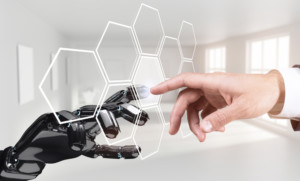 There’s a contradiction at the heart of manufacturing.

On the one hand we are told that increasing automation will lead to higher production rates and improved efficiencies.

And yet, at the same time, there’s supposed to be a trend towards mass personalisation, with consumers expecting greater variety of products without a corresponding increase in cost.

How do manufacturers square the need for speed with the desire for something different?

The answer, it seems, comes in the form of Industry 5.0. That’s right. No sooner has the concept of Industry 4.0 been established in common parlance, then along comes its bigger and better sibling.

Industry 5.0 seizes the benefits of increased automation delivered as a result of the fourth industrial revolution and re-introduces humans back into the loop. Whereas Industry 4.0 setups are largely about consistency of quality and flow – replacing functions in which lesser-skilled people had to carry out repetitive, burdensome tasks – Industry 5.0 is about highly skilled people and robots working side-by-side to create individualised products, services and experiences.

That could mean workers giving their personal care to items like car interiors, high-spec watches and jewellery, craft beers and foods, designer clothing and even software. It’s only through man and machine working seamlessly together that manufacturers will be able to meet the rising expectation of an increasingly discerning customer base.

But hang on a minute. Isn’t there a good reason why robots and workers are separated on the factory floor? Powerful robotic arms have, traditionally, been housed behind safety cages to protect humans. But the latest generation of collaborative robots (cobots) feature a suite of positional sensors that enable them to react to the presence of a worker in a split second. It’s the development of these cobots that, in certain applications, will allow human beings to be re-introduced back at the centre of industrial production – encouraging new levels of product personalisation and giving consumers what they actually want.

According to Per Kloster Poulsen, a director at Universal Robots, one of the world’s leading developers of intelligent automation, cobots are versatile, easily programmable and safe. As a result, their capabilities become a personal tool that members of any work force can use to apply their creative skills more effectively, to provide greater human value.

At a Future Robotics conference at Warwick University at the end of November, Poulson told delegates how the relocatable nature of cobots, encouraging frequent interactions with humans in shared spaces, would lead to more flexible production lines and a quicker return on investment.

The potential of cobots is clear for all to see. Global organisations such as ABB, Kuka and Festo have joined Universal in producing their own models in what has quickly become a highly competitive sector. Indeed, the market for cobots will be worth $3 billion by 2022, predicts Poulsen.

The overall message from the Warwick event came across in a resounding manner. The robots are coming – and in the future world of Industry 5.0, it seems that humans will be marching with them too.

About the Author: Lee Hibbert

Lee Hibbert is an account director (content) at Publitek. An award-winning journalist, editor and content strategist, Lee has more than than 25 years' technical editorial experience. He has led and managed teams across print and digital titles, having been the long-standing editor of the IMechE's flagship publication Professional Engineering.