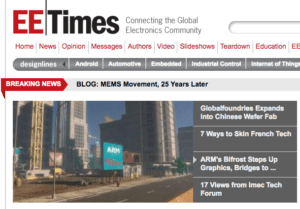 As we predicted back in March, component distributor Arrow Electronics has agreed to buy a number of publishing assets in North America and Asia from UBM plc. The official announcement is due tomorrow, June 3rd, and it seems likely that these assets will be marketed under Arrow’s AspenCore brand. We don’t yet know the full extent of the deal, but we understand that it includes EE Times and EDN in North America and Asia (the China part presumably being subject to government approval), Embedded.com, TechOnline and possibly some UBM events. This move follows Arrow’s acquisition of United Technical Publishing, a division of Hearst Business Media, in February last year and its subsequent purchase of German company, ICC Media, publisher of Embedded Control Europe, last December.

It’s a bold move by Arrow, which is clearly trying to dominate the established channels of communication most used by electronics engineers. EE Times is the jewel-in-the-crown, not only because it is the world’s leading B2B electronics trade media brand, with a claimed three million page views per month for the English language site alone, but also because it commands the highest domain authority in the sector, according to MOZ. Domain authority predicts how well a website will rank in search engines, so if your messages appear on eetimes.com, they’ve a good chance of being found. This matters in a world where a Google search is the first thing most people do when they’re looking for something, except in China, of course.

A lot of other distributors and component manufacturers now find themselves between a rock and hard place. If they don’t promote themselves on some of the ex-UBM sites, they miss the opportunity to reach a large audience of electronics engineers that may be difficult or expensive to access in other ways. If they do, every cookie and click-through to their own sites could be captured by Arrow and used to its own advantage, assuming its systems and processes mean it’s smart enough to do that.

Of course, the move creates publishing opportunities too. A growing number of smaller, independent publishers are building loyal followings of their own, as we noted back in March. Now there’s a chance for even more to emerge.

So what of UBM’s strategy? Yesterday, it announced the acquisition of the ‘Content Marketing Institute’, a business with a pseudo-academic name. Unsurprisingly, UBM’s CEO, Tom Cobbold, presented the move as part of it’s ‘Events First‘ strategy. With successful events reportedly generating net profits well in excess of 30%, it’s little wonder that UBM has chosen to divest itself of price-pressured and therefore less profitable publishing assets, most of which have been carrying unsustainable overheads for two decades. Will these outlets deliver better value for Arrow or will they be asset stripped for their contact lists and left to wither on the vine when the writers they currently employ retire or head for the hills because they treasure their journalistic independence? Only time will tell.