Although still deemed as “fluffy” by many B2B marketers in the electronics industry, social media marketing is an essential activity.

Aside from contributing to your search engine optimisation efforts, it is often used as a tool for keeping up-to-date with the latest news, and has the potential for distributing your messages far beyond the limits imposed by email marketing.

This post is designed as a checklist to ensure your Tweets maximise their reach and engagement with your followers, as well as those outside your direct connections. 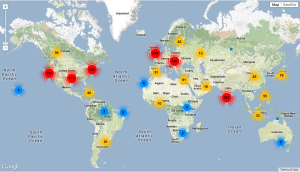 It’s obvious. The more followers you have, the more chance that your message will be seen, engaged with, and potentially reach others that aren’t directly following you.

Many social marketers simply follow as many people as possible, with the hope of gaining a return follow, and unfollow those who don’t reciprocate.

A follower strategy enables you to target relevant followers and can be achieved in a number of ways:

What are the best timing and frequency of Tweets

Timing is everything. This isn’t email where your posted content sits in the recipients inbox waiting to be actioned as and when time permits. You need to time your activity to coincide with the time when your followers are ready to digest it.

How to increase the reach of your Tweets

Hashtags and mentions can help increase the potential reach of your post: hashtags are helpful for organic searches and can be treated as a form of SEO – yes, Twitter is also a search engine; mentions are useful to appealing to the sycophantic nature of social media. Social media participants like recognition. By massaging their ego, you will be more likely to gain their brand advocacy.

How to increase engagement with your followers

Engagement is easier if you’re using Twitter as a customer service tool, but if you’re using it other purposes – thought leadership, brand development, and / or lead generation, it becomes more difficult.

How to improve the quality of Tweets

An unrelenting torrent of Tweets that link to your latest press release is unlikely to inspire and engage with even your most ardent fans. Providing consistent and frequently updated content is key, and by providing a variety of content from numerous sources keeps your Tweets interesting, and also positions your company as a thought leader in your industry.

Jon has been working in digital marketing for over a decade and with technology for over 30 years. He even demonstrated the UK’s first online booking system to the BBC when he was 4 years of age. His expertise encompasses digital strategy, CMS and ecommerce websites, bespoke and mobile apps, SEO and social media campaigns, e-mail marketing, web analytics and conversion rate optimisation.