Are electronics B2B publishers ready for the mobile revolution?

Are electronics B2B publishers ready for the mobile revolution? 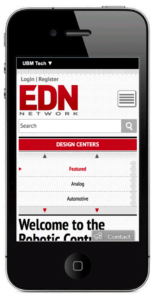 News is becoming more real-time, more social and more mobile. At the centre of these historic changes are personal devices – the smartphone and the tablet – that give more control to consumers.

The BBC has recently released the results of the world’s first global study into the usage of mobile devices by affluent consumers, focused on determining the growing impact of TV, smartphones, tablets and laptops on people’s news consumption habits.

Key takeouts from the study include:

The findings correlate with a global study published in 2013 by Reuters Institute Digital News Report, based on a survey of online news consumers in the UK, US, Germany, France, Italy, Spain, Brazil, Japan and Denmark who found that:

How is news consumed?

The laptop or desktop remains the most important single device for accessing news but smartphones and tablets are not far behind in terms of the proportion of users accessing news each week.

This does of course have to be taken into context. Smartphone news usage across all countries was heavily focused on the under 45s, with older groups largely sticking with computers. In terms of age, tablets show a more even spread, with a significant bulge with the 25–44 age group. A recent Hearst study determined that the majority of electrical engineers are aged between 50 and 60.

How is news discovered?

The Digital News Report also delved into how people discover news. The following table shows the top news sources broken down by country:

The above figures provide further clarification about why news consumption on mobile devices is on the increase.  Users discover and consume news through a variety of the channels at their disposal:

A responsive site is helpful from a user’s perspective and hence is looked kindly upon by Google and reflected in search engine rankings. With search being so popular for news discovery, it would seem that providing a mobile friendly means of consuming news would be a no-brainer.

How do B2B electronics publishers perform when it comes to mobile news consumption?

We tested some of the top B2B electronics online media from around the world to see what they were doing to deal with the change in news consumption. Is their website mobile responsive or do they have a separate mobile optimised website? Do they provide a mobile app?

Somewhat surpassingly, only three of the 14 websites reviewed were mobile responsive. Four outlets compromised with a mobile site, allowing them to have lots of content on desktop, but quick load times on mobile. The downside to this approach, from an SEO perspective, that inbound links will now be shared between the two versions of the website. Depending on the publishing platform, this will also require updates to be made in two places.

Two publications provide a mobile app. This is an interesting approach, and one which could be a step towards monetising their digital news offering.

According to the Digital News Rport survey, there has been a significant rise in the number of respondents paying for online news – albeit from a low base. In the UK 9% (+5) of the sample said they had paid for digital news in the last year. for France this figure was 13% (+5) and the USA was at 12% (+3).