Elektroniikkalehti has reported B2B electronics and other high tech news in Finnish for over two years and it’s now undergoing a facelift to become ‘ETN’. 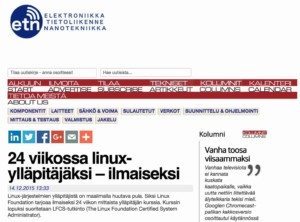 Editor-in-Chief, Veijo Ojanperä describes the reason for the change: “The name ‘Elektroniikkalehti’ has served us well, but as a name it is starting to sound a bit narrow. It is more and more difficult to draw the line between a device and a service, between hardware and software, between dedicated and distributed, or local and cloud based. ETN tries to reach the essence of this new world.

Electronics is everywhere so the E is an inherent part of our scope. The T points to the long Finnish tradition in telecommunications. It can be seen in the history of Nokia, the new Nokia and in most innovative products of our startup scene.

The N refers to nanotechnology. It describes the miniaturisation of devices and components and the emergence of new materials that often combine intellect with nanoscale structures. This is an area where Finnish companies will leave a mark in the future, even in global scale.”

The ETN.fi site retains the current URL. It offers news and technical articles weekly and newsletters are published twice a week. Everything is in Finnish