Electronica, the world’s biggest electronics trade show, starts today in Munich. With 3683 exhibitors set to attend spread across the halls, plus nearly 300 journalists already registered and (what feels like) countless extra visitors what should your press strategy be?

To answer this we’ve analysed coverage and Google search data for a handful of the industry’s bigger names to understand the ideal press-announcement strategy.

Should you save your announcements for trade shows?

Over the years we’ve seen several arguments made on the best strategy. Mostly these fall into three main categories:

1: To pre-announce significant news – in order to get people interested in meeting you in the run up to the show.

2: To announce significant news at the show – lots of press are attending so coverage should be higher.

3: To set up press meetings, but not announce anything (or just make a minor announcement) – using it to introduce or re-introduce your company to the key press and pre-brief for future announcements.

As of the 8th November, 290 press were pre-registered to attend the event (this will have grown, 531 attended in 2016). And 265 exhibitor press releases were already listed on the Electronica website. Clearly not all will get coverage.

And even if each journalist wrote up (an optimistic) five articles each, and this was evenly distributed among the exhibitors, 531 journalists x 5 is still less than one article per attending exhibitor.

As one colleague put it,  “As a journalist I was asked to write about 5-8 stories to justify my trip. I would visit the blue chips as they’ll always have something of interest for the readers, then look for novel startups, and much of the rest was for background or relationship building.”

But is this just him? Probably not.

The chart below shows the publications that mentioned “Electronica” more than 5 times during the 2016 show, which ran 8th to 11th November.

Combine with this is the fact that of the 2784 items of earned-coverage (i.e. not newswire coverage) that Meltwater says referenced Electronica and were published during the show (including those on the musical genre), a significant proportion went to just a small handful of companies. Infineon, for example, had 212 of these. 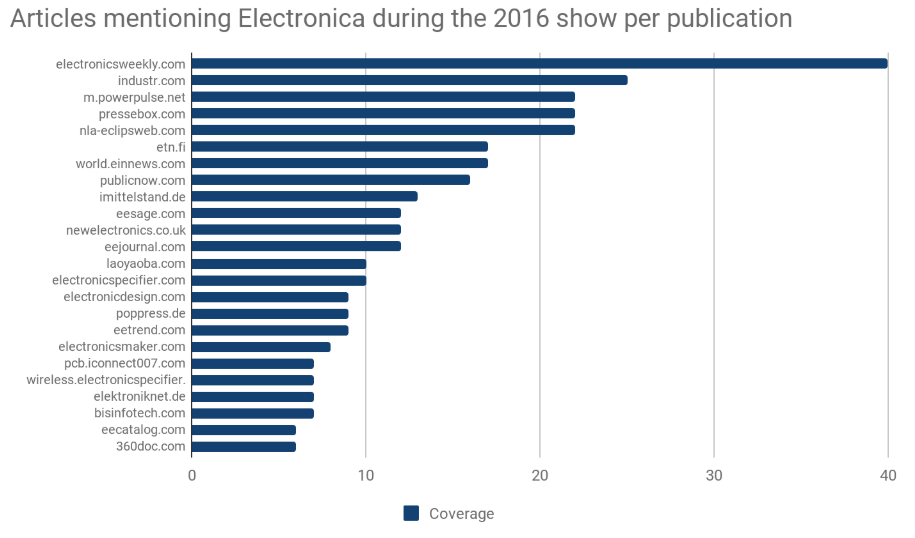 Lesson 1: a lot of companies are fighting for limited coverage. Your chances of coverage are therefore lower.

Does announcing at a show reduce a release’s coverage?

To analyse this we’ve chosen Semtech. The company is significantly well known in the semiconductor industry, plus it made an announcement in both the run up to and at the 2016 show. Both of these focused on one particular product range, its LinkCharge wireless charging technology, which gives us a keyword that can be tracked in any language and allows us to compare coverage for the product range from the show with the rest of the year, correlating with when press releases were distributed.

We ran a Meltwater search to see if anyone covered this during the show – and no publication did. We also ran a Meltwater search for the month before the show and two years after it to see how well Semtech’s LinkCharge technology is typically covered. Again, there was no earned coverage (ie newswire coverage removed) during Electronica. Conversely, a pre-show announcement made just two weeks before generated 10 earned articles.

We’ve also run a coverage search for subsequent releases made during the two years since Electronica 2016 – and each press release typically generates between two and five time the number of earned mentions of coverage in the press, as you can see in the chart below. 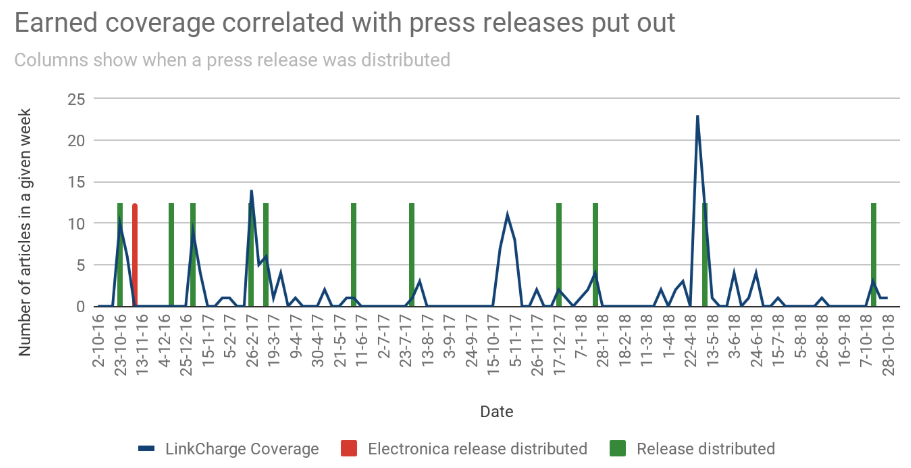 This wasn’t just one show and one company

We also looked at Analog Devices, chosen because it is well-known and we remembered it making strong announcements during Mobile World Congress and Embedded World in 2016.

The company made an announcement on IoT technology and we’ve again looked at the coverage it received on this topic throughout the year and correlated it with press releases going out.

Again, as you can see in the graph below, it typically gets a good deal of coverage per press release. But during MWC and Embedded World it got next to none. And the announcement was a strong one, but it was drowned out by the high level of competing noise.

Lesson 2: Your announcements will likely receive less attention if made as a press release at a show

So, what can be done to generate coverage at a show?

If we look at again at Infineon, yes, it is among most prestigious firms in the electronics sector but it also did something novel and eye-catching at the show. Of its 212 items of earned coverage that mentioned both Infineon and Electronica, around 75% focused on a demonstration for a Rubik’s cube solver that the company had on its booth. 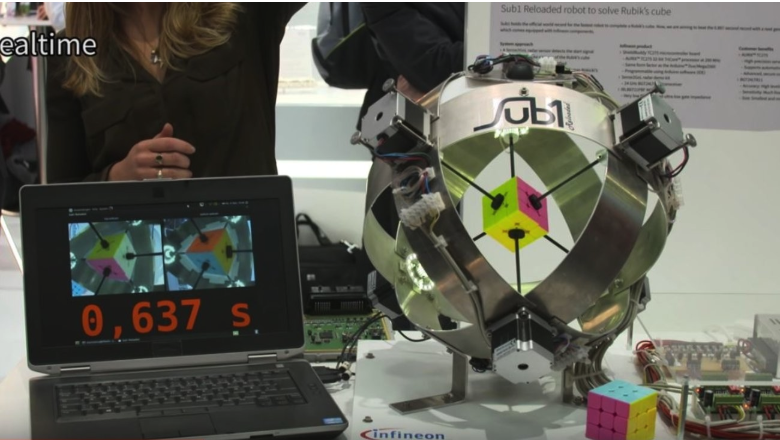 Lesson 3: If you want to focus on the show, be unique, be eye-catching

Will a newswire help you raise awareness?

Newswires will deliver guaranteed coverage. They have agreements with many publications (including the Wall Street Journal and Bloomberg) to automatically post press releases distributed via their service. However, these articles are rarely available through the publication website, and even a search on the site will not bring up the coverage. And while these articles are searchable on Google, the search engine will usually only show the results if keywords from the release are used, so you need a product name as well as a company name and therefore would need to be already aware of the news to find it.

An analysis by Publitek into the effect of newswires on reader behaviour also highlighted issues with using these services, with Bloomberg (which uses a different URL structure for wire and true editorial coverage, allowing you to compare the two types) shows a marked difference in the number of shares each type of article gets. This reinforces the poor value of newswire coverage.

Lesson 4: just about nobody shares newswire coverage, even when it’s on Bloomberg, but they do share ‘real’ news

Does coverage at a show help drive awareness?

The effect of coverage should be to change behaviour – do people do something as a result of it – be it to investigate a product, go to a shop, or become less wasteful – and we routinely monitor not only coverage but its effect on web traffic and search patterns.

It’s common for coverage on an announcement to drive an increase in both of these two metrics – see the graph below. This shows the effect of announcements on searches for the LimeSDR platform annotated to show the start of a 6-week crowd-funding campaign, which was only promoted through PR. 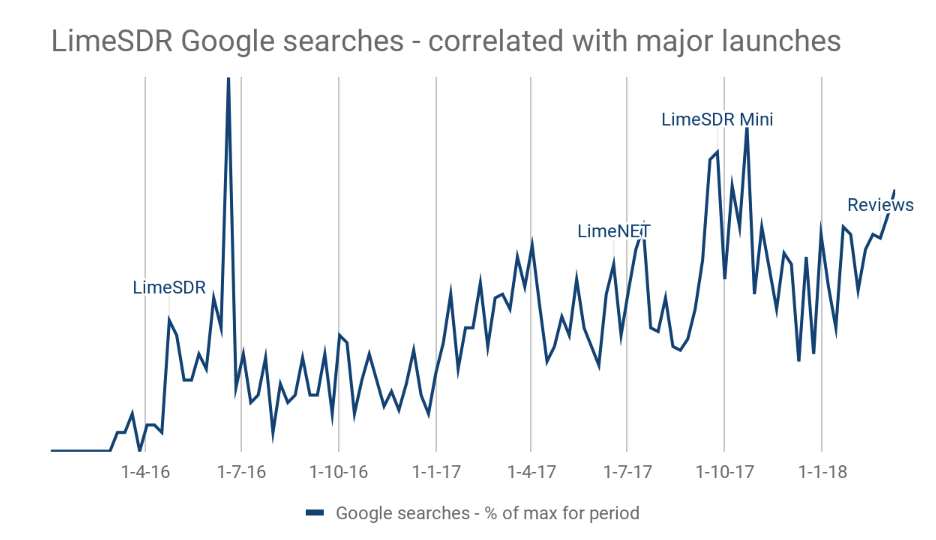 Let’s look again at Infineon. With the company being mentioned in roughly a tenth of all Electronica 2016 articles, we were keen to see if it had an effect on search patterns during the show. It did not. In fact, searches during Electronica, CES,  MWC and Embedded World were not above median search patterns. And during CES they were significantly below.

A different strategy for Electronica and, in the future, for other shows

As an agency representing some 120 tech companies, we’ve found that press announcements made at trade shows deliver lower of coverage than those pitched before or after those shows.

Since 2008, in each Electronica year Publitek has held a pre-Electronica event for which we bring the most influential editors from Europe, North America and Asia to a 5* hotel outside Munich. Here we hold embargoed briefings that are published in the weeks before Electronica to drive awareness of each client’s announcements in the run up to the event.

We’ve found that this strategy delivers the best return on investment for our clients. At the show we can then use meetings as relationship builders and pre-briefing sessions for 2019 advances.

If you’d be interested in finding out more about our 2020 pre-Electronica event, or would like to be informed about other upcoming pre-show press conferences, please get in touch.