Google drops author pictures – did they ever really matter?

Google drops author pictures – did they ever really matter?

For years now it has been pretty much standard practice to embed pictures within any content you create in order to give a bit of impact and to explain complex principles. Pictures on websites have also been used extensively in order to portray certain emotions. For example, a healthy living website will have a “lifestyle” picture at the top of some people dancing merrily on a sunny day.

To the same extent, blogs and articles sometimes have pictures of the author next to them in an attempt, I guess, to show that the person writing the article is, in fact, real. Seeing a picture of someone and reading what they’re written could perhaps give you a little more empathy with the views of that person.

And so it came to be that Google did one of their Big Experiments and began putting author pictures next to search results, like so: 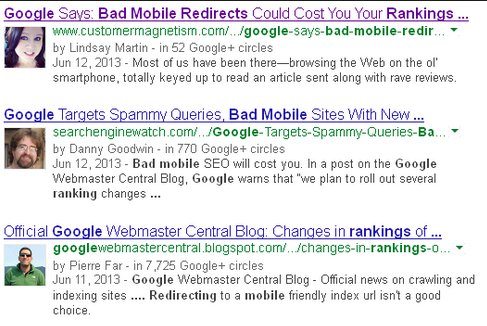 How it used to be – authors and their work

This, we were told, meant that those authors with the greatest influence (decided exactly how, we’re not sure) would gain greater prominence with their images appearing more readily next to the search results for the things they’ve written. Did it work?

It seems that Google doesn’t think so and the images have now disappeared. Just like that.

They’re not removing the authorship part as such, that will still remain, but instead of an image, you’ll now just get the author’s name:

How the new design will look.

Is this a big issue? Well it seems not many people have been using it anyway. According to Search Engine Watch, only 3.5% of Fortune 100 companies actually use Google+ authorship. Some say it’s a major SEO blow seeing as the author picture is taken from the Google+ and surely that’s a good link for SEO purposes?

Perhaps the real reason they were removed author images is that they drew readers eyes away from sponsored PPC advertisements, and as Google continues to further monetise search, the company realised that pulling eyes away from paid-for content was a bad idea.

Did you use it? How has this affected your click-through?

About the Author: Andy Calloway

Andy Calloway is a content writer who's work history has spanned all kinds of industries, nearly all related to technology and science. He now provides digital marketing support to many of Pinnacle's customers to help them get a better presence on-line.