Our recent study into the social media activity of top companies within the semiconductor industry revealed that Instagram outperformed other platforms on engagement.

We were surprised to discover, however, that many companies are not embracing the platform. Half of the companies in the study don’t have Instagram at all whilst the others don’t post frequently enough to take full advantage of what it has to offer.

It will certainly be interesting to see which businesses learn from these tech giants and go on to leverage Instagram, perhaps pushing ahead of those not taking it so seriously.

But what can we learn from the leading companies within the semiconductor industry?

We looked at the feeds of the eight companies that performed best on Instagram to find out: NVIDIA, AMD, MediaTek, Intel, Toshiba, Samsung, Arm, and Texas Instruments.

We can start to sort their posts into different categories with the aim of discovering which attracts the most engagement.

Many articles about Instagram, such as this one, recommend posting at least once a day to maintain a consistent presence and build a following. But, we’ve noticed that none of the companies mentioned adhere to this.

In fact, they’re not even close.

NVIDA posts most frequently with roughly 15 posts a month, with Texas Instruments coming in a close second. Posting schedules for the others are much more sporadic. Arm, for example, will sometimes post up to 15 in one month, then will only post three the next.

It’s possibly quite telling that the company that posts the most has won the Instagram battle in the semiconductor industry. On the other hand, the effects of posting more or less are very inconsistent. 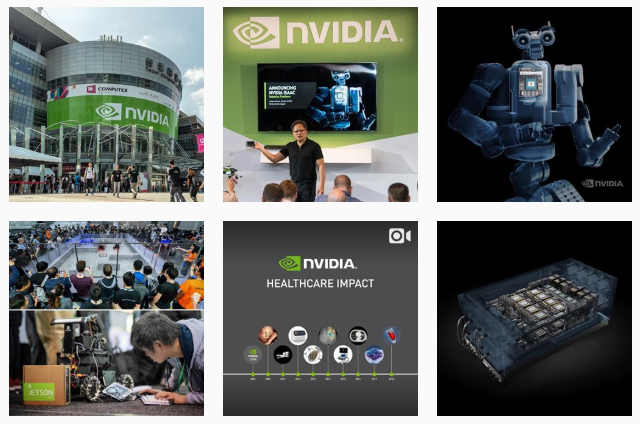 For most of the companies, including NVIDA, AMD, Texas Instruments, and Toshiba, there doesn’t seem to be much impact on their engagement when they post less. In fact, many posts for Intel and Samsung seem to perform better if they’re posted after a long hiatus.

For a couple of companies, such as MediaTek and Arm, engagement does increase when they post more frequently, but even then, the difference isn’t too noticeable.

Most Instagram users know that you can use up to 30 hashtags on a post and that they can be used to push your content in front of a wider audience. But how do the companies we’ve studied use hashtags on their posts and how has it worked for them?

Most include less than 10 hashtags on each post, all being relevant, industry-related tags including #AI and #gamedev.

The only company that doesn’t use any hashtags is Samsung, while Intel occasionally uses 1 or 2 for trending topics which do tend to perform better.

For most of the companies it’s difficult to gauge the impact of their hashtags on engagement as their use of them is consistent. It was, therefore, difficult to make comparisons. For Arm, Texas Instruments, and Toshiba, however, we noticed a few patterns.

Arm posts anywhere between 2 and 15 hashtags and the posts with more perform noticeably better. Meanwhile, Toshiba posts up to 25 hashtags on each post and engagement doesn’t increase much at all when using a lot of them. 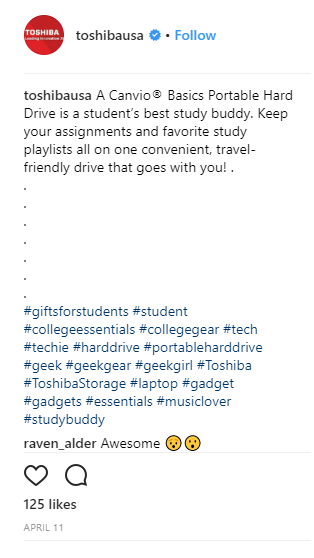 Interestingly, Texas Instruments only uses 1-5 hashtags per post, yet, the ones that only include its own hashtags outperform those that use more hashtags.

Of course, all of our conclusions are to be taken with a pinch of salt as many of the companies featured have benefited from having a lot of fans before Instagram became popular, so have managed to grow followings quickly.

But, overall, the posts that attract the most engagement are images including behind-the-scenes photos, posted frequently, using up to 15 hashtags.