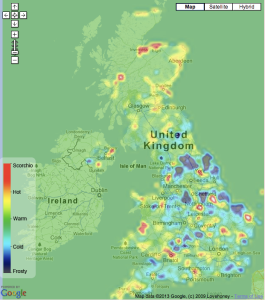 I make no denials about being a geek. I love data and I love when they’re presented well.

If you don’t believe me then take a look at David McCandless’s book, Information Is Beautiful. Inside the 255 pages are some of the best examples of how data can be broken down and displayed in order to deliver easy to understand, visually striking graphics – note, I didn’t say infographics.

And when it’s presented well, newspapers and magazines will fight this. You just have to look at the New York Times, the Economist or Wired to see this. But, if you want to bring people back to the website then hosting an interactive data analysis yourself is, of course, best. Unfortunately, it’s something the electronics industry tends not to do but it’s something we can learn from other industries.

If we look outside the electronics space, one of the best examples comes from a UK based distributor. The company used the free Google Maps API to create a heat map of where their products shipped in the UK, and highlighted interesting stats on how each town ranked compared to the average and what were the biggest selling items there.

It’s a work of breathtaking genius, uses nothing more that the sales data they already have and still generates coverage, four years after its creation.

Returning to electronics, when I worked for FreeRTOS, I always wanted to create an annual graphic of how many downloads each variant received, which would give an idea of general trends within the MCU sector. The message being “we make the most popular RTOS for MCUs.”

And when I worked with network intelligence firm, Epitiro, allowed us to monitor the effect of everything from the UK election debates (web sped up as everyone watched them) through to Iceland’s Eyjafjallajökull volcanic eruption (web speeds slowed around airports as people searched for ways to get home). But the best was the a project that we ran with the company and the BBC to map the UK’s 3G data. This got trade, TV, radio, national (and international) coverage – and countless tweets, including Stephen Fry.

But it’s not just your own data that can be used. We’ve run data analysis on freely available UCAS (UK’s university admissions organisation) figures for the UK Electronic Skills Foundation to highlight some of the (in some cases alarming) trends in the numbers undertaking electronics degrees. And Google Insights allows you to compare search trends for any keyword, here I’ve compared Intel, ARM and AMD, with an impressive drop in interest over time for Intel, coinciding with the boom in smart phones.

To generate web traffic, very little beats good data presented well. It adds to people’s knowledge. Presents you as an expert. Highlights what you do and sell. And, best of all, can bring a smile to people’s day. As an industry we need to use our data more.