How the world of B2B electronics digital marketing has responded to Google’s Mobilegeddon – not well!

How the world of B2B electronics digital marketing has responded to Google’s Mobilegeddon – not well!

A recent analysis of the industry’s leading players’ websites finds that more than a quarter are losing visitors to a key sales channel by not implementing mobile responsive sites.

Early in 2015, Google unleashed Mobilegeddon, an upgrade to its search algorithm that dropped a site’s ranking for those searching via the phone or tablet if its layout was not formatted for these devices.

Google makes tweaks to its algorithm on a daily basis to constantly deliver more appropriate results and minimise the effect of people trying to game its system by, for example, loading a piece of copy with keywords at the detriment of how it reads. In this case, the tweaks simply reflected the prominent role that the phone and tablet plays in search.

But, because the changes were seen by Google as being significant, the company even announced that there would be the changes in February, giving two-month’s notice before they finally kicked in April.

At the time, it was reported that SEO specialists saw this as “ the biggest change since 2011

[when Google unleashed Panda] – and for some that will unearth some unpleasant memories.”

Panda saw a huge swathe of websites, with some seeing their rankings downgraded by as much as 90-plus per cent. Gadget website Electric Pig, for example, was downgraded by 94% after Panda kicked in.

For the Mobilegeddon update, Google downgraded sites (but only on phone/tablet-based searches) that don’t deliver best practice. For example, the text is too small to read on a phone, the links are too close together and it’s hard to click each, the mobile viewport is not defined or the content (such as the banner bar) is wider than the phone screen.

We’ve reported on the need for companies and publishers to get behind mobile more. Last year my digitally-gifted colleague, Jon Barrett, highlighted that just three of the 14 top B2B electronics trade media websites were mobile responsive: EDN, Electronics Weekly, and Electronic Product Design and Test. Amazingly, EE Times is still not mobile responsive.

An additional four outlets had a separate mobile site but this has its drawbacks. While it does allow additional content on desktop and quick load times on mobile, download speeds are less of an issue and, as we said then: “the downside to this approach, from an SEO perspective, [is] that inbound links will now be shared between the two versions of the website. Depending on the publishing platform, this will also require updates to be made in two places.” 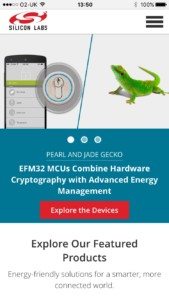 And search is big. The last time we spoke about this in depth was 2013 in a post entitled “Why every business in the electronics industry needs mobile optimised websites and emails”, but even then the need for mobile responsive sites was clear, with 17.4% of global traffic coming through mobile. In China this was 23.6%.

Since then, web site access from mobile devices has grown massively. FIPP, for example, announced in September that worldwide mobile now accounted for a third (33.4%) of all web traffic. With many countries (including India and China) being significantly above this – India being 65%, for example.

It’s now been eight months since the Mobilegeddon update was released. So how has the industry responded?

We’ve analysed data from both the 40 companies monitored for our latest ‘Social Success’ white paper And also the 20 companies listed by IC Insights as the top companies by value as of Q1 2015. Albeit, the merger of NXP and Freescale reduces this to 39 and 19.

In short, the industry’s response to these figures has been poor. More than a quarter from each group had not, with 28.21 per cent (11) companies from the Social Success list and 26.32 per cent (5) companies from the IC Insights list failing to implement mobile responsive sites – and losing traffic as a result.

Here at Publitek, we have access to the Google Analytics of many companies that we run SEO, PR and content marketing for. And we have seen a difference in the levels of traffic coming from mobile devices for sites that are/aren’t responsive. This may not be as a direct consequence of Mobilegeddon – whether or not it’s a result of down-ranking, or just people not coming to and staying on a site that loads poorly from a mobile is debatable – but either way, the result is the same, relatively few prospects visiting the companies’ key sales channel.

How to check if your site is responsive

The majority of new sites will be mobile responsive, the overwhelming majority of WordPress and Drupal sites should be by default. But Google has prepared an instant checker, simply visit here and paste in your URL.

If you’d like help to build a mobile responsive site, please let me know: [email protected]