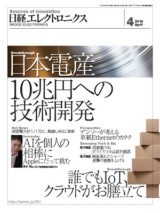 NIkkei Electronics has second change of chief editor in 4 months

He replaces Hiroki Yomogita who, after just 4 months in the role, leaves on April 30th to join a semiconductor venture in Silicon Valley.

Thanks to our Japanese partner, Hitoshi Kasai of Miacis for this news.