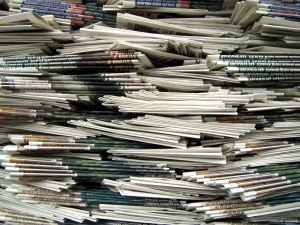 I’ve recently come back from paternity leave (Have you? Yes, a little boy, since you ask…) and, having finally had a chance to catch up on emails – if not sleep – and the various stories I missed, I’ve discovered I’m flabbergasted that people are still harking on about press releases and the death of them.

Take this for example… taken from the Hub in a post called The Press Release Is Dead (Again) and written on one of my last days before heading out the office for two weeks sleepless nights.

Of course, not all companies are so entrenched in a format that originated in the days of manual typewriters when copies of press releases were delivered by mail to smoke-filled newsrooms. Some companies, like Facebook, have long used their own blog instead of press releases, to share product and company news.

Now, I’m probably the last person who will ever hark on about the benefits of a press release – especially having seen them from a journalist’s perspective. They’re impersonal. They’re often trying to reach 5 different audiences with the same information (a recipe for failure). They’re often written to appease the boss, not the journalists’ readers. And they’re often devoid of anything interesting for the readers – see my 10 PR commandments piece from last year.


But, when well written (ie written for one group of publications – in our’s the electronics press) and sold in properly (ie with the right journalists contacted personally … and not just fired out over the airwaves with no sell-in, just a hope that some of it sticks to magazine pages) it can be remarkably effective because it makes the journalist’s job that little bit easier and presents them with everything they need to know to write the story.

That’s all a release is, something to help a journalist (bloggers, anyone) know about a story and understand why it will be relevant. If the story is rubbish, it won’t get written. If the story is awesome, it will go viral regardless of the press release. The fact that you publish it as a blog rather than as a release – or stand in the middle of Times Square, Manhattan, shouting it from a loudhailer – is immaterial. All that matters is that you show people that can give your announcement extra credibility the information they will need to write about it, in a way that will interest them and allow them to do it quickly.

It’s a little sad that after 8 years of Twitter, 10 years of Facebook (my son was born on it’s birthday) and nearly 15 years of Blogger we, as an industry, are trying to make news for the way we send news out via these channels rather than just getting on with it, writing copy that is relevant to the publications and their readers and trying to rebrand the press release as something else.