Research: why a quick glance at results is a dangerous thing

Research: why a quick glance at results is a dangerous thing

For the past few years we’ve followed, and participated in, Hearst’s ‘Design Engineer and Supplier Interface Study’. This research, focused on the electronics industry, showed that the top 3 sources of new product information used by design engineers are digital trade magazines, printed trade magazines and web search engines.  It was initially rather a surprise to see a chart from the ITSMA’s 2012 study entitled ‘How B2B Buyers Consume Information’ which ranked trade media much lower at around half the score of web search. However, there were some significant differences between the two studies . The ITSMA one questioned buyers, not engineers, and most electronics trade media is written primarily for engineers. It was not so industry specific, and some industries may not be well served by trade media. And last but not least, there is sample bias in the Hearst study because all the respondents were known to consume information from trade media, in either digital or print formats. 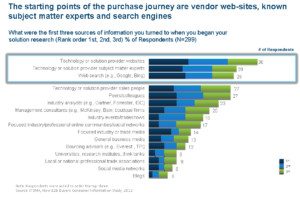 Interestingly, both reports put social media at the bottom of the list of useful sources. If taken at a glance, the results suggest big budgets allocated to social media are the result of misguided judgement. I have heard many a VP of Marketing and CEO state that they “don’t believe in social media”. (Much in the same way that they don’t believe in advertising but have personal eBay accounts, I guess.) Of course, real judgements can only be made when the data presented is correctly interpreted. The ITSMA study puts technology or solution provider websites as the most important starting point for the purchasing journey. Those sites are often discovered through web search and organic search results (as distinct from pay-per-click ads) are influenced by, amongst other things, inbound links from trade media and blogs, and by social media presence and activity. The bars of the bar chart are not channels that operate in isolation. Each is inextricably linked with the others. To ignore social media channels because they’re at the bottom of the chart is to do damage to your chances of being found by customers through the channels listed at the top. What’s more, today’s online tools allow businesses to create a strong social media presence with relatively limited resources. If you don’t already know how, please get in touch.