Why we should thank Georg for Electronica

Why we should thank Georg for Electronica

I’m traveling today by train from my Wiltshire home near Bradford-on-Avon, England, to the thriving Bavarian City of Munich in the south of Germany. I’m on my way to the world’s largest electronics trade show for engineers, Electronica, and I can’t help but reflect that the event may not be taking place but for the efforts of a chap called Georg. If you’re attending Electronica 2018, you might think about taking time out to visit the Technical University of Munich. You’ll find a statue of him there. Georg was born into a Protestant family on March 16, 1789 in Erlangen, some 200 km north of Munich. He was one of only three children to survive into adulthood from the seven his mother gave birth to.

Georg had a rather chequered early career. This including working as a mathematics teacher in various seats of learning. However, the final chapter of his life was spent as a professor of experimental physics at the University of Munich. Munich was also the city in which he died, on 6th July 1854. 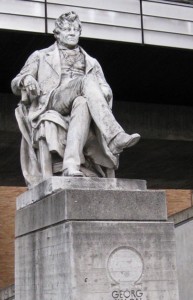 So what’s the link to Electronica, you may ask? Well, in 1827 Georg published a work entitled The Galvanic Circuit Investigated Mathematically. In it, to quote Wikipedia, ‘he stated his law for electromotive force acting between the extremities of any part of a circuit is the product of the strength of the current, and the resistance of that part of the circuit.’ This, and later works, contributed enormously to our understanding of electricity. So much so, that he was awarded the prestigious Copley Medal for his efforts in 1841. He then became a foreign member of London’s Royal Society in 1842. Other honours followed, not least one of the most fundamental laws of electricity and the Standards Institute (SI) unit of resistance being named after him. Ohm’s Law and the ohm both honour Georg Simon Ohm. Oddly, the SI decided that the unit’s name should start with a lower case ‘o’. which seems strange when you consider that all nouns are capitalised in German.

I can’t help but wonder if I would be making today’s journey to Munich if it were not for Georg’s endeavours nearly 200 years ago. I wonder if the electronics industry as we know it would exist today. Most of all I wonder if Publitek’s engineering-led marketing agency team, could have made a living for the last twenty years by providing technical marketing communications services to our industry. Whatever the answers, I think we should all thank Georg for Electronica.