It’s really early days to even be contemplating how wearables will affect PR. The market for such devices is tiny – Strategy Analytics states that 2 million smartwatches were sold (worldwide) last year, with the majority coming from Samsung. A similar picture can be seen in the UK with Kantar ComTech stating that 426,000 shipped in the UK, or less than 1 per cent of the population.

The number of people using them are smaller still – with a white paper from Endeavor Partners suggesting that a third of all wearable devices end up in the bottom of a junk drawer within six months.

And a quick look at Ebay will reveal an even more interesting picture, with many brand new devices going up – at the time of writing there were 437 Ebay results for the term “Samsung Smartwatch” and many of these are on for just 99p +p&p. One of the reasons for this is operators bundling the smartwatch with phone. This both inflates the numbers – people haven’t actively chosen to go out and pay for it – and allows them to use this to help pay for the smartphone, which is what they wanted in the first place.

But, going back on topic, it is likely that the market demand for wearables will increase significantly – especially as Google Glass will go on sale to developers shortly (possibly even next month) and the countless reports help to raise people’s awareness. And Canalys expects 5 million wearable tech units to ship in 2014, with the market tripling in 2015 – this is still a long way off the 51 million iPhones that sold in the last quarter of 2013, but, anyway, it’s rising.

I believe this rise will (eventually) effect the way that media is consumed… publishers will therefore need to move with this trend and PR / digital marketing companies will need to keep up. 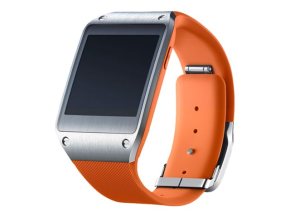 Will the smartwatch affect the publishing and PR industry?

From a publisher’s (I’m including company news / blog in this) point of view, it’s effectively a continuation of the smaller screen – a smartwatch is (currently) nothing more than a small second screen for the smartphone after all. And this means that there are simple steps that they can take:

Naturally, PRs will need to work with this and remove every conceivable roadblock that might prevent a journalist using their clients’ news. But they’ll also need to make sure a couple of other items are in place:

I admit, it’s a long way away, but many marketing execs missed the importance of getting the mobile strategy right – see Jon’s excellent blog post on the importance – and effectively, the adoption of wearables is just an extension of this. But, by thinking about it now we can get it right and deliver content that’s compelling regardless of the size of the screen.